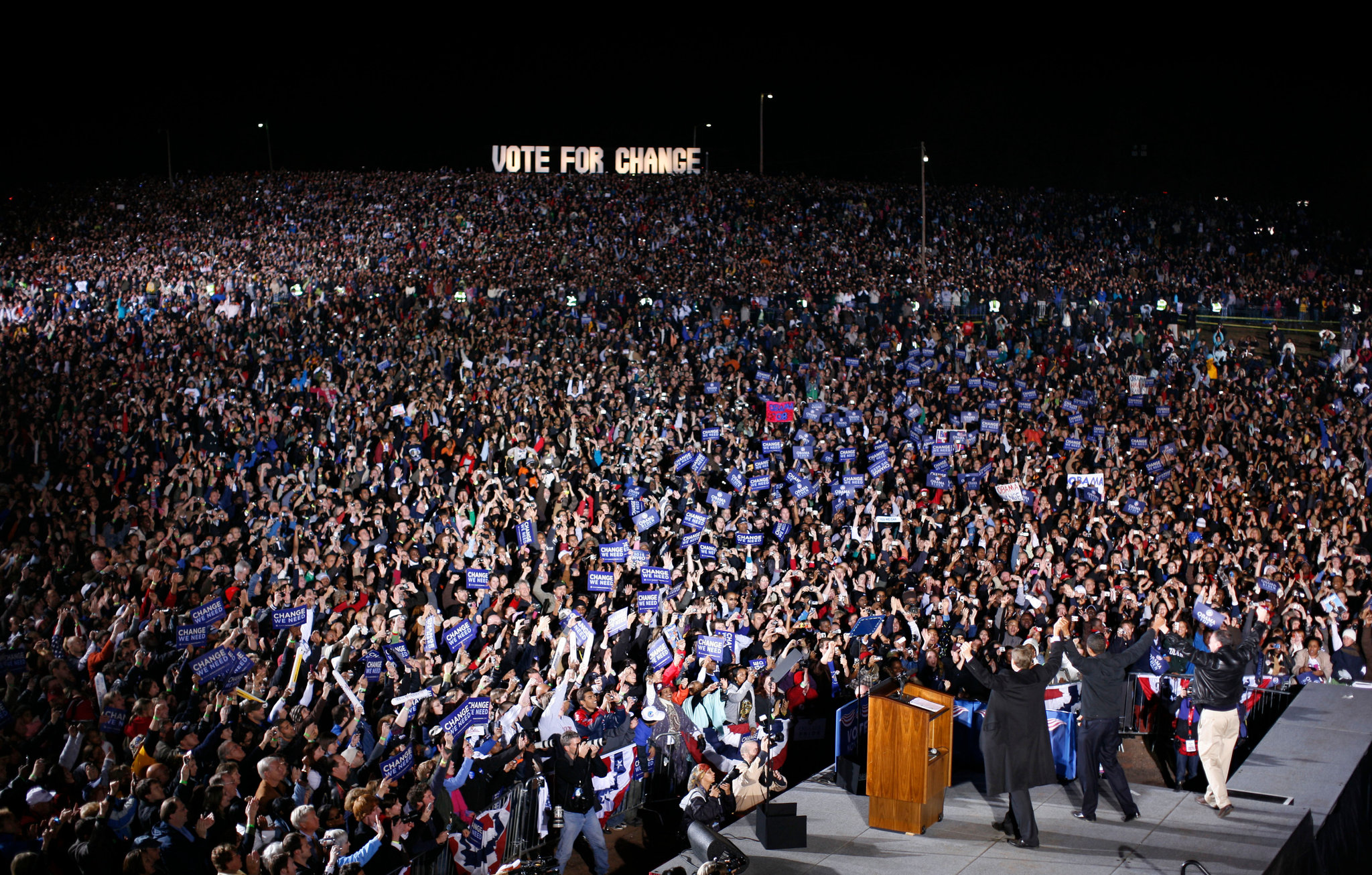 President Obama at a rally in Virginia on Nov. 3, 2008, his last day of campaigning before Election Day.

The outcome Tuesday night — Hillary Clinton’s popular vote victory of 59,916,932 to Donald Trump’s 59,690,096 (so far), coupled with her sizable Electoral College defeat — demonstrated not only how hard it was for her to try to steer an unwieldy Democratic coalition to the White House but also the particular danger posed by the accumulation of what sociologists call “small disadvantages.”

“It appears that the Democratic campaigns modeled for turnout levels similar to ’08 and ’12, but when those groups didn’t materialize, they were essentially stuck, losing key battleground states due to low Democratic core group turnout,” Bill McInturff, a Republican pollster, and other Public Opinion Strategies staffers wrote in a smart postelection analysis. “Simply put, Clinton did not perform like Obama and was unable to pull Democratic coalitional groups to the polls.”

Clinton held an 80-point advantage among African-Americans, but was unable to match Obama’s 87-point edge in 2012 or his 91 points in 2008. She won 65 percent of Latino voters, compared with the 71 percent who voted for Obama in 2012. She won 28 percent of non-college white voters to Trump’s 67 percent, the largest gap in this demographic since the early 1980s, according to Pew. Moreover, she lost whites with college degrees 49-45. Among millennials, she won 54 percent of voters aged 18 to 29, compared with 60 percent for Obama in 2012.

As the leader of the Democratic coalition, Clinton was unable to get maximum production from her diverse supporters, and at the same time her efforts to appeal to individual demographic groups fueled the retaliatory backlash that Trump capitalized on to make incremental but decisive gains.

There were four core constituencies in the Clinton coalition: a cosmopolitan elite, including a “boat load of CEOs” from Morgan Stanley, J.P. Morgan, Goldman Sachs and other financial companies; the upscale white middle class represented by Elizabeth Warren, Bernie Sanders and Clinton’s running mate, Tim Kaine; African-Americans, from celebrities like Beyoncé and Jay Z to activists from Black Lives Matter; as well as Hispanics, immigrants (legal and undocumented), and refugees.

Clinton’s appeals to these groups made her uniquely vulnerable to populist anger. A Reuters-Ipsos Election Day survey of 10,604 voters revealed the extraordinary depths of their fury. Three quarters of those polled agreed with the statement that “America needs a strong leader to take the country back from the rich and powerful.” Almost as many, 72 percent, agreed that “the American economy is rigged to advantage the rich and powerful.” A majority, 57 percent, agreed that “more and more, I don’t identify with what America has become.”

The results in the rust belt: Pennsylvania, Ohio, Wisconsin, Iowa and, it appears, Michigan — all carried by Barack Obama in 2008 and 2012 — went for Trump. These states account for 70 Electoral College votes, more than enough to have produced a different outcome on Tuesday.

The disclosures of questionable fund-raising practices at the Clinton Foundation — and of the millions of dollars both Bill and Hillary Clinton collected from speeches — clearly cost Clinton support. They also provided fodder for Trump’s sustained social media assault on the Democratic candidate, reinforcing populist resentment against her – somewhat ironically, given Trump’s personal wealth, which is far greater and more opaque than the Clintons’ millions.

A memo from Doug Band, a longtime Clinton fund-raiser and aide, demonstrated the “messy relationship” between the foundation and the Clintons’ personal wealth, which ate away at the loyalty of at least some voters. The headline on the Oct. 27 NBC story succinctly described the political liability of the foundation: “Hacked Memo Reinforces Worst Perception of the Clintons.” These revelations chipped away further at any Democratic advantage because they tapped into what James Sidanius, a Harvard sociologist, calls “white resentment of the liberal establishment.”

Many structural factors eroded Democratic margins and contributed to their Electoral College defeat, including the emergence of deepening schisms in the electorate. One of the most striking elements of the campaign is how alienated the Clinton and Trump electorates are from each other.

Adam Bonica, a political scientist at Stanford, used Crowdpac to pose questions to voters that allowed him to explore this gulf in a study of the views of the supporters of all the candidates.

Bonica said in an email that many of the responses suggested that Trump loyalists could be described as “authoritarian/nationalists.” Nearly nine out of ten Trump supporters agreed that “people living in the U.S. should follow American customs and learn English,” the single strongest predictor of Trump support. One out of four Clinton supporters shared this view.

Joel Kotkin, a fellow at Chapman University, described internal shifts in the Democratic Party that contributed to the erosion of Midwestern support for Clinton. In City Journal on Wednesday, Kotkin wrote:

She had it all — the pliant media, the tech oligarchs, Wall Street, the property moguls, the academics, and the all-around ‘smart people.’ What Hillary Clinton didn’t have was flyover country, the economic ‘leftovers,’ the small towns, the unhipstered suburbs, and other unfashionable places. As Thomas Frank has noted, Democrats have gone “from being the party of Decatur to the party of Martha’s Vineyard.” No surprise, then, that working- and middle-class voters went for Donald Trump and helped him breakthrough in states — Michigan, Wisconsin, Iowa — that have usually gone blue in recent presidential elections.

According to Mason Williams, a history professor at Albright College, the failure of Democratic leaders to address the erosion of local institutions in the wake of capital mobility, disinvestment and austerity resulted in the party’s setbacks in the Midwest. In that region, Williams wrote:

Trump exploited the moral and psychic anxieties stemming from very real working-class precarity by mobilizing a white-nationalist identity politics. The political agency of the white working class was not channeled into a project of moderate national reform, even to the degree it had been during the Obama years. Instead, it issued forth as a primal scream of despair and rage that will reverberate around the world and down through history.

Late Wednesday afternoon, Senator Sanders issued a statement that followed up on this theme:

Donald Trump tapped into the anger of a declining middle class that is sick and tired of establishment economics, establishment politics and the establishment media. People are tired of working longer hours for lower wages, of seeing decent paying jobs go to China and other low-wage countries, of billionaires not paying any federal income taxes and of not being able to afford a college education for their kids — all while the very rich become much richer.

Along similar lines, William Greider wrote “The Plain People Spoke on November 8” in The Nation:

Tuesday’s ballot-box rebellion was a profound act of small-d democracy. I know that will offend many who are genuinely fearful of the violent talk and bigoted slurs that Trump has employed and encouraged. But so far, the Trump campaign has operated within the nonviolent democratic tradition.

Greider catches some of the crusading tenor of the Trump campaign, but does not take into account the fact that Clinton won the popular vote.

Nor is he inclined to see Trump in the terms that James Fallows chose in his October 2016 Atlantic piece. Fallows quotes the primatologist Jane Goodall on Trump.

“In many ways, the performances of Donald Trump remind me of male chimpanzees and their dominance rituals,” Goodall told Fallows:

In order to impress rivals, males seeking to rise in the dominance hierarchy perform spectacular displays — stamping, slapping the ground, dragging branches, throwing rocks. The more vigorous and imaginative the display, the faster the individual is likely to rise in the hierarchy, and the longer he is likely to maintain that position.

Fallows notes that Goodall, in her book “My Life With the Chimpanzees,” tells “the story of ‘Mike,’ a chimp who maintained his dominance by kicking a series of kerosene cans ahead of him as he moved down a road, creating confusion and noise that made his rivals flee and cower.”

Clinton’s failure to gain a sufficiently strong foothold among her essential constituencies in the face of Trump’s incendiary tactics speaks to the complexity of the decision making a woman faces when she attempts to corral her own supporters. For Clinton, picking up those few needed votes in the face of multiple obstacles proved impossible. But it is also true that this is the second time in the past five presidential elections that the popular vote winner has been the Electoral College loser, which had last occurred in 1888. Should this continue to happen, it would begin to call into question the legitimacy of our current system.